I spent the summer of 2013 working in Oulipo's archives in the l'Arsenal branch of the National Library of France, located in Paris' 11th arrondissement. During this period, in recognition of their contribution to contemporary literature, the library was preparing to digitize the archives of the French writing group, who are best known for incorporating constraint-based and mathematical rules into their composition styles. My job was to sift through and review the contents of each box in the archive in order to ensure that it correctly corresponded to the documented inventory, and to see that everything was collated correctly.

At the time I was also taking French classes but still couldn't speak or read the language terribly well. I enjoyed the process of learning to read via letters written by the likes of Italo Calvino and Michèle Métail, but cherished contributions from English-speaking members like Harry Mathews and Ian Monk, as I could more easily enjoy their contents.

One of Mathews' submissions that's stuck with me to this day is a form that he calls equivoque, presented during the création portion of an Oulipo meeting, in which group members would share new forms they were working on. He was tired of having discussions about the United States' 1976 presidential election, so he composed a poem of couplets in two columns. When read in its entirety it's in favor of Gerald Ford, but when read as just the left column it's for Jimmy Carter.

Another example in this style can be found in his Armenian Papers. This one, which my brother Bryce found and scanned, is either Mathews' wish for his lover to stay with him or a call for their separation. 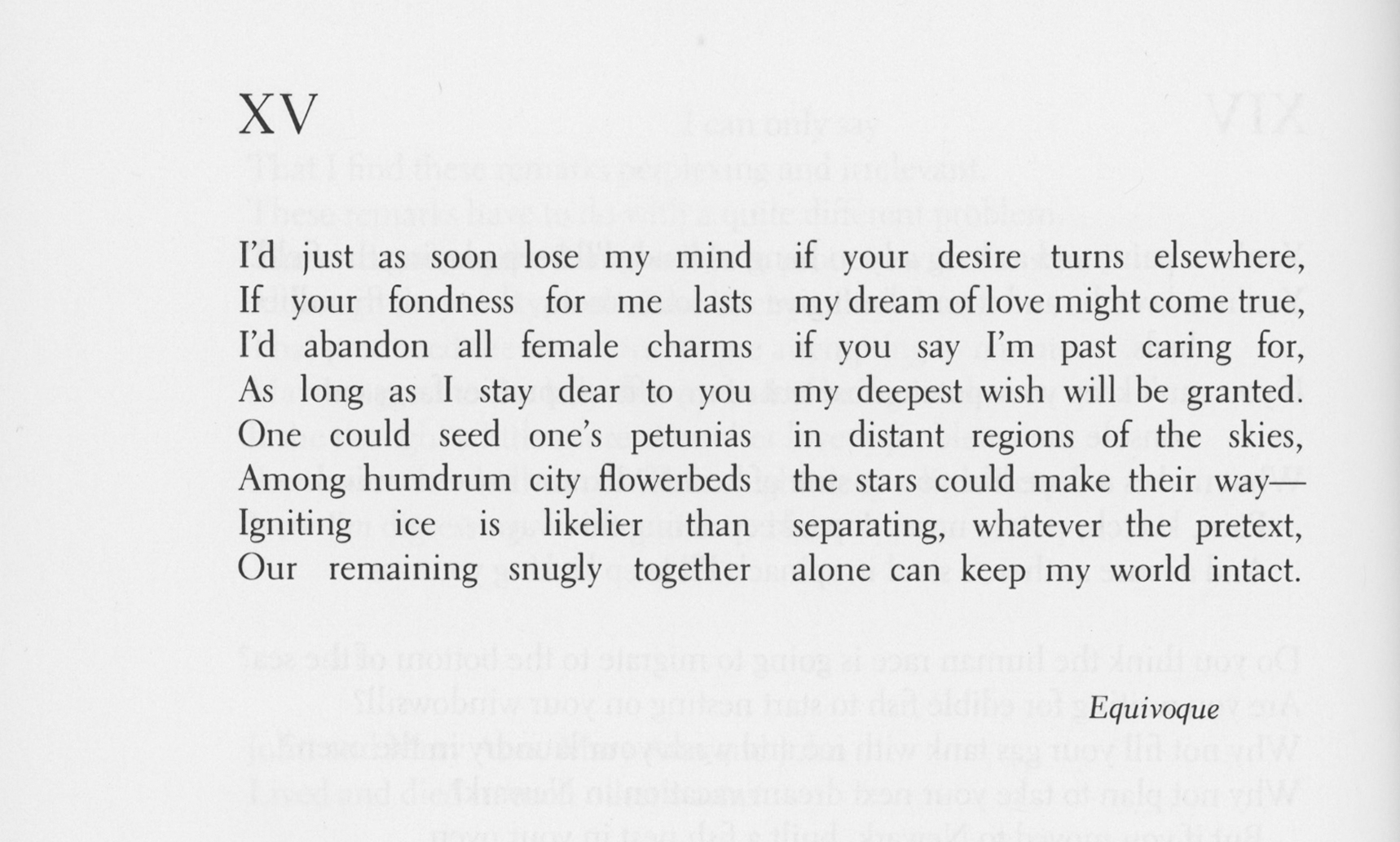 I referred back to the election poem recently and realized that the ambivalence it represents no longer feels charming to me. In a newsletter to his students, Bryce called the poem's stance "privileged complacency," which I think is appropriate given that despite Mathews' involvement in lefty intellectual circles, he came from great wealth and could be sure that nothing about his social status would change whether a Republican or Democrat was in the White House. Though this criticism could be seen as an indictment of the two candidates or parties rather than Mathews, one gets the idea when reading him that political interest was to him more of a parlor game than a process with tangible stakes.

The ambivalence I feel about about the two 2020 candidates stems from the frustration of how little the two parties differ in methodology when it comes to issues like healthcare, climate change, and hemming in the finance sector. On these issues the parties' differences are more rhetorical than material. They simply use different language to clear the way for capital's unfettered advance with the expense as usual being human and environmental exploitation. Today's liberal and conservative politicians would have us believe that they're polar opposites, but their work is really its own sort of equivocation.

I decided to write an equivoque for the present election cycle, but rather than a case for either Biden or Trump, I aim to show how the argument for Biden is all but a case for four more years of Trump. 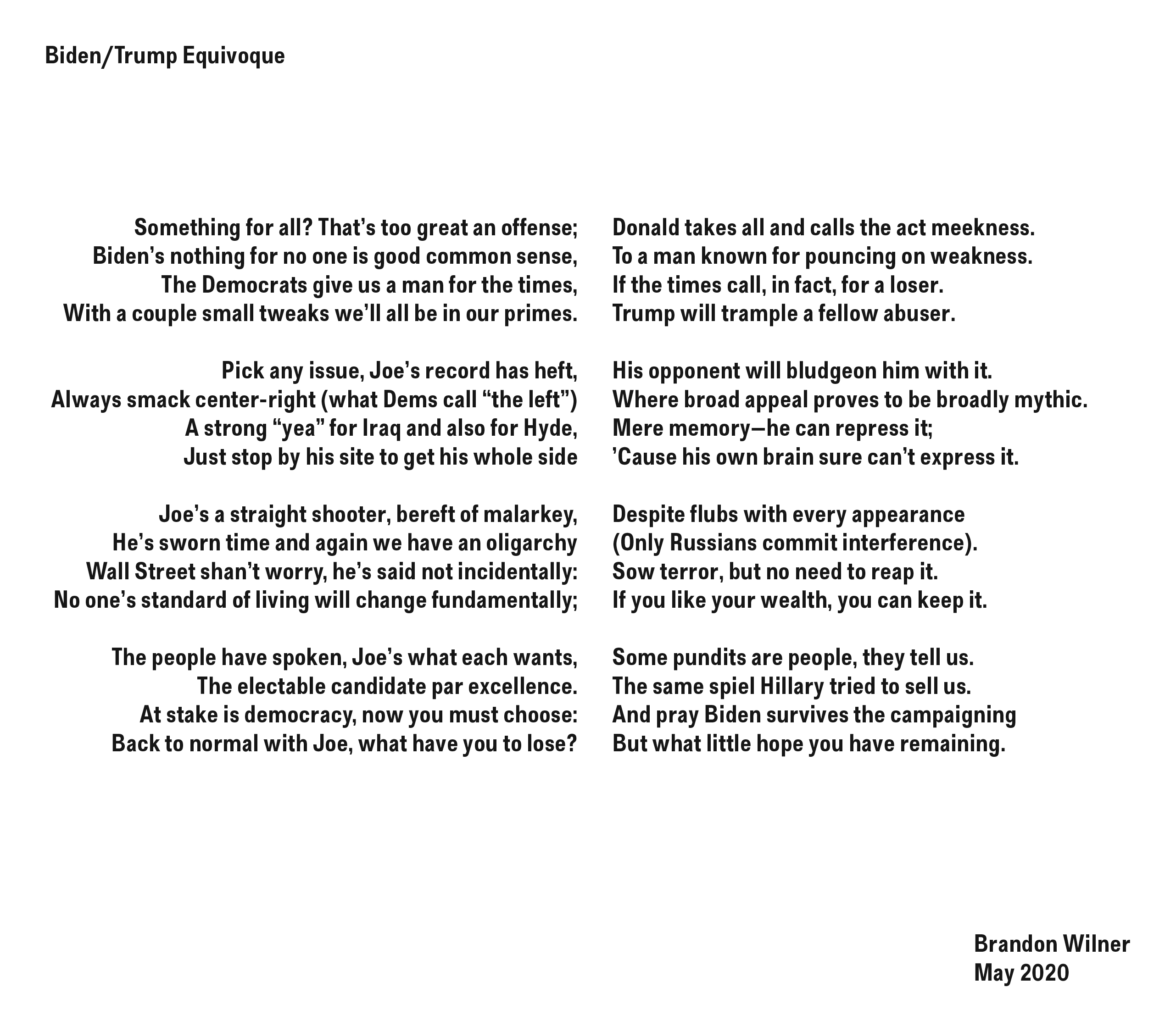 My contribution to the equivoque form, 2020. Typeset by Bryce Wilner in his Grotesque No. 3.

On its own, my poem's left column espouses the tepid defenses that liberals and media types give for Biden. When read with the right column it provides an expression of how these arguments sound to an exasperated voter base that's being told to expect less and less. In truth I'd be embarrassed if someone read the left column and thought I'd written it in total sincerity, so I guess I wouldn't cut this one in half and give it to anyone. While they're two separate poems, they're best read in consideration of each other. Not so equivocal after all.