Every great reggae movie has at least one scene in which the protagonist's participation in Rastafari, reggae music, or pan-Africanism clashes with the culture that surrounds them, and in which they're discouraged from expressing these interests. In The Harder They Come, the preacher admonishes Ivan as he cleans up a bike part and dances to Desmond Dekker, "Fixing your bicycle?! You should be reading your Bible! Reading your Bible! You hear what I tell you? Reading your Bible, three times a day!" In Babylon, the Ital Lion sound system's white neighbors break into their storage space and trash the group's gear, prohibiting them from performing. In Rockers, Horsemouth and Dirty Harry are disappointed with the disco playing in the club they visit, so decide to "change the mood" by hijacking the DJ booth and toasting over "Queen Majesty" by the Techniques (though the dancers they annoy eventually do join them). 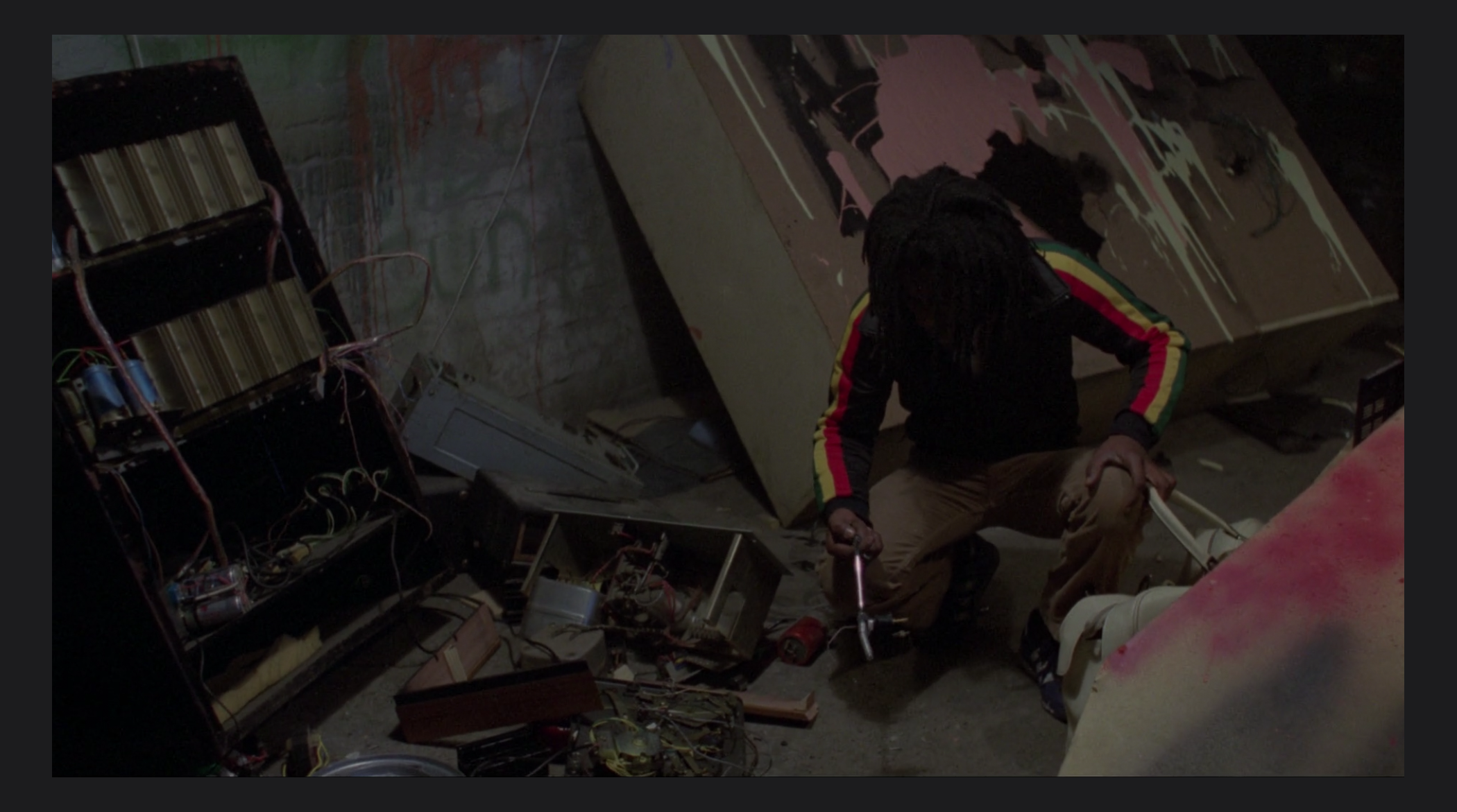 The struggle against imperial hegemony is a defining feature of many Caribbean narratives: a young student demonstrates aptitude or passion for literature, but comes to realize that the language of, say, Shakespeare or Thackeray or Arnold is not theirs, and that it's unfit for describing and especially for criticizing their environs. They instead must look to their own neighbors, family, and ancestors for influence. One finds distinct yet common versions of this experience in Aimé Césaire, George Lamming, Simone Schwartz-Bart, Michelle Cliff, C.L.R. James, Édouard Glissant, ….

In a talk given in Washington, D.C. in 1996, the great Barbadian poet Kamau Brathwaite, who died earlier this year, recalls a specific image that made him alerted him to the inadequacy of the tools his colonial education provided for describing the events he witnessed on the beaches of his small island. He often gazed into the tidal pools, "that little memory of ocean," that were left on the shore at low tide. Keats was the only poet he knew of who mentioned pools or puddles, but the Romantic's pools were lonely; they clearly had nothing in common with those of Barbados. "They probably had tuberculosis — they certainly lived in a garret."

With Keats as his only example, Brathwaite's attempts at writing these pools were delicate and austere, not at all like the social bodies that were welcomed back into the ocean every night. He eventually realized that the iambic pentameter that he'd been taught as correct poetic meter was the issue, that this prosody had no relationship to the language he heard spoken around him, and he looked instead to calypso, which was considered primitive expression. Like our protagonists in the reggae movies, he nonetheless found the rhythm of this singing better suited to his needs, and to writing the history of Barbados. 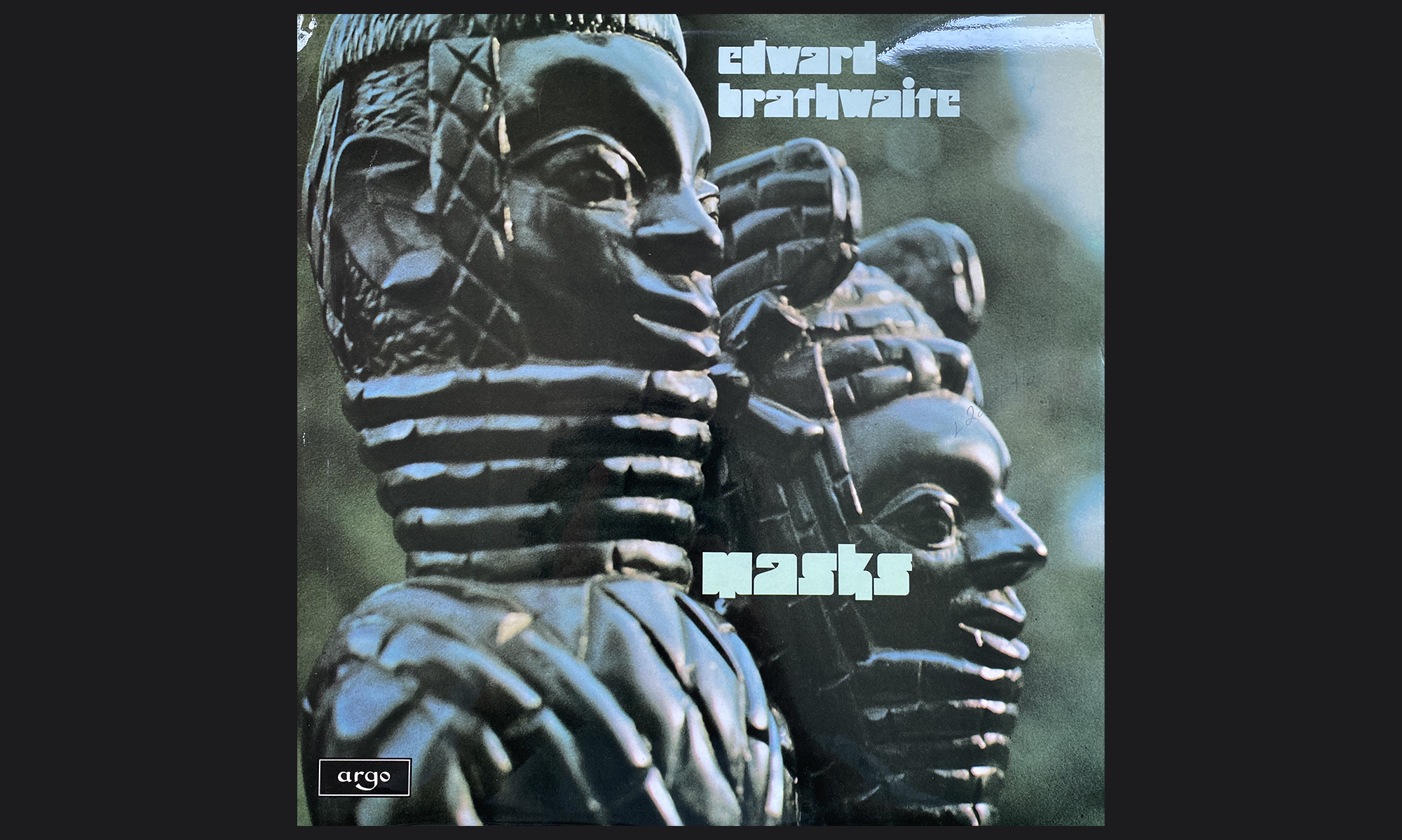 Brathwaite's three early volumes Rights of Passage (1967), Masks (1968), and Islands (1969) were his first true realizations of this language's poetic potential. Together these collections make up The Arrivants: A New World Trilogy (1971), a natural and unnatural history of Barbados told in English, Barbadian Creole, Bono Twi, and Akan. In 1972 Argo, the British label primarily concerned with spoken-word records, issued a recording from August 28th, 1968 of Brathwaite reading the entirety of Masks. Interestingly, though he received and started going by the name "Kamau" on a trip to Kenya in 1971 and his The Development of Creole Society in Jamaica appeared under that name in the same year, this record still has his name as Edward Brathwaite. Perhaps this is simply to match the name used on the original cover of Masks, as The Arrivants also originally appeared under that name.

At the risk of disparaging other poets who recorded albums of their own work around this time, I will say that Brathwaite's reading is a cut above most that I've heard. Many such records have the poet affecting an overt "literary" voice that sounds unduly influenced by radio speaking conventions of their era. Others provide evidence that the poet was simply not all that familiar with the microphone, with little to no true presence on the recording. Worst of all is when the reader sounds natural or is putting on a compelling performance, but the recording or record pressing is simply not up to snuff. Often the surface noise from even a clean copy of a spoken-word record shows that the apparent market demand for literary performance did not always ensure technological quality in the presentation.

Brathwaite on the other hand is a magnificent reader. He jumps from one language to another with no pauses for recalibration, proceeding through the text so fluidly that I get the impression he's reading from a scroll rather than a book or traditional manuscript — he doesn't even halt to signify the turning of a page. 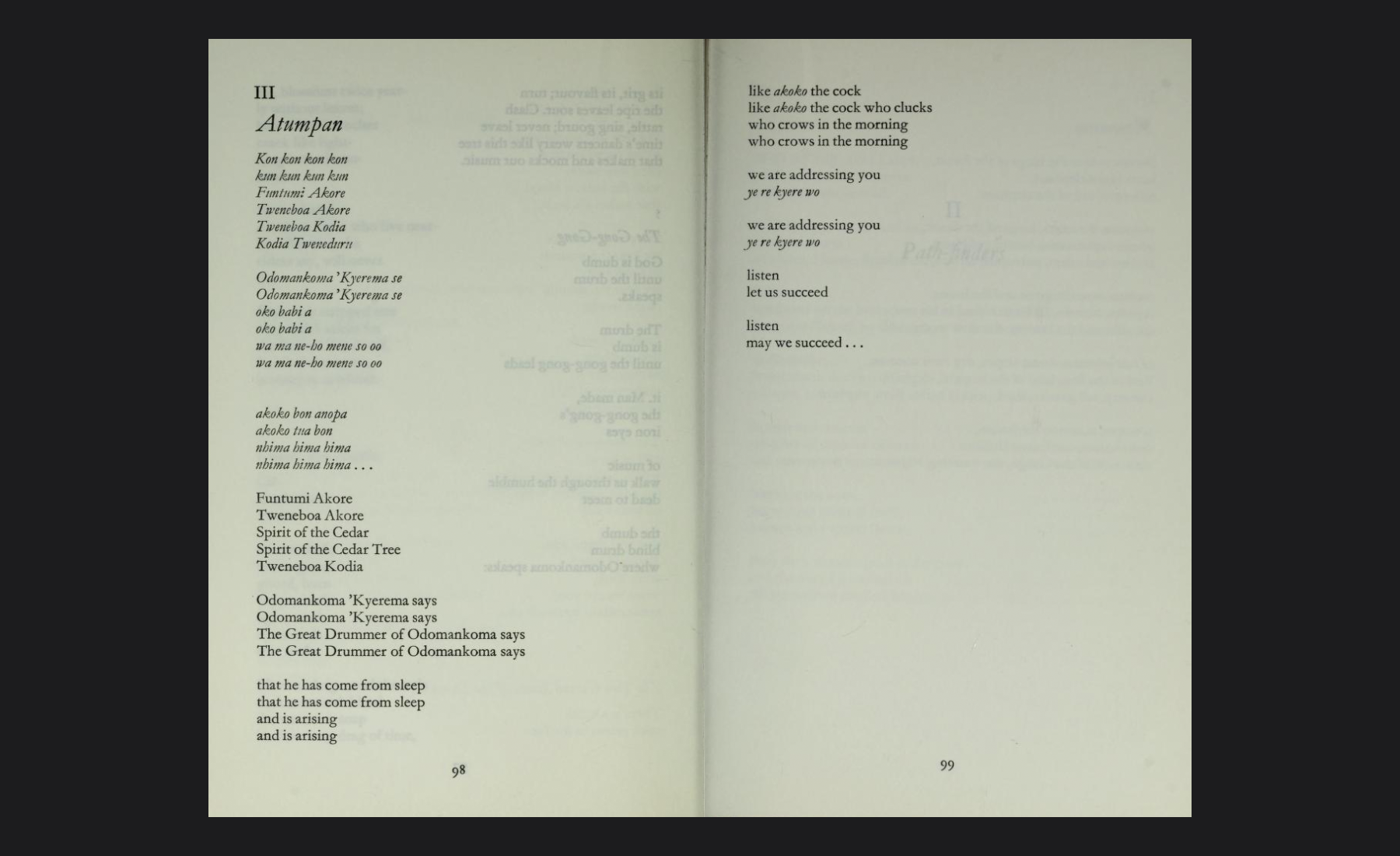 "Atumpan" from the Masks section of The Arrivants: A New World Trilogy (Oxford University Press, 1973).

Brathwaite's interest in musical language is also on full display. I generally understand refrain to be a particularly musical gesture in poetry, and he plays up this quality by singing his way through repeated lines and phrases, as in this section named after the Akan talking drum, "Atumpan." Have a listen to it at 7:32 in my upload of side A. 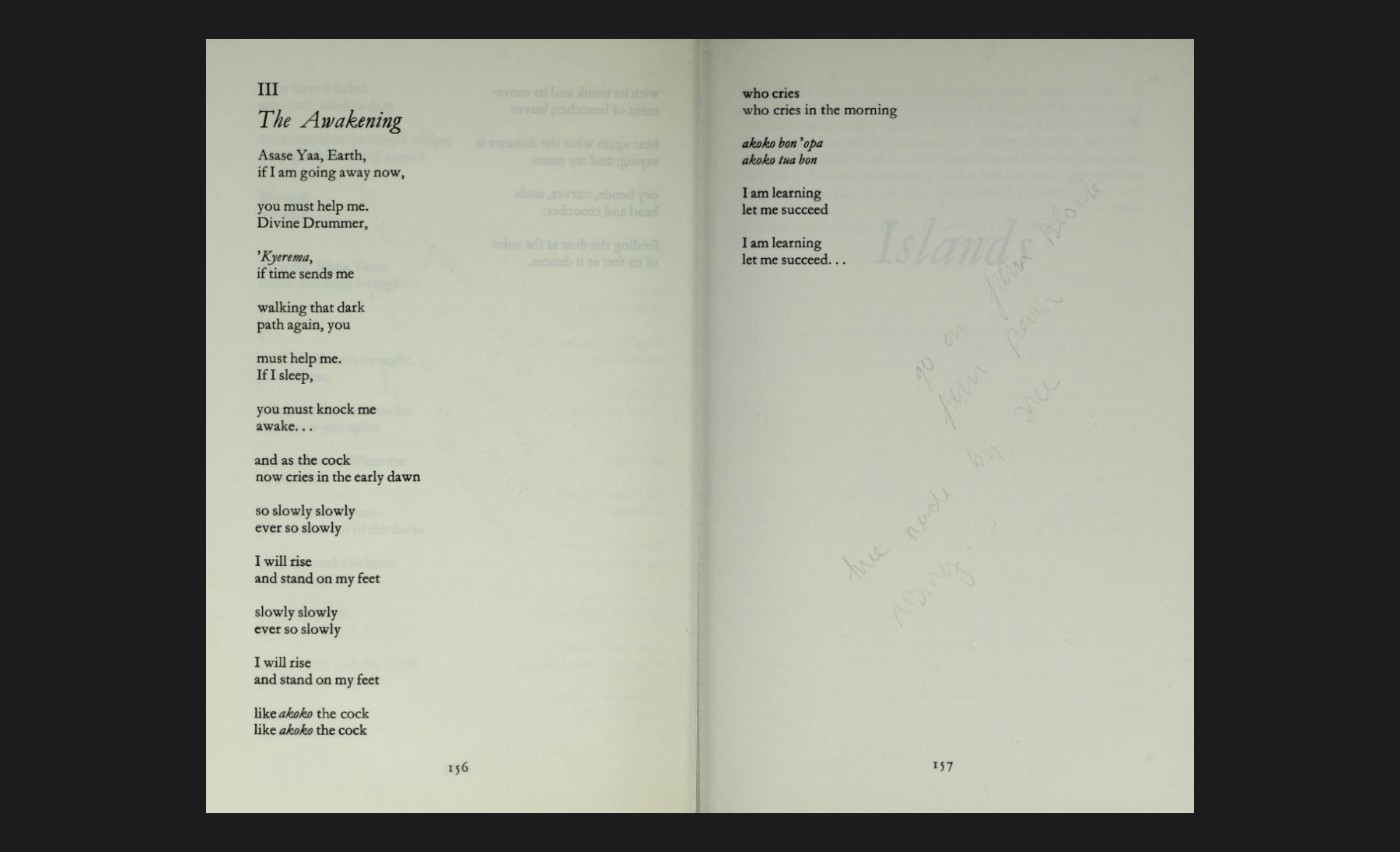 "The Awakening" from the Masks section of The Arrivants: A New World Trilogy (Oxford University Press, 1973).

Another great example is in the closing poem "The Awakening," (at 25:14 in my upload of side B) where akoko the cock "who cries in the morning" reappears. Brathwaite sings his name with the same rhythm as in "Atumpan" above, but with more anguish now audible in the speaker's voicing, as if the rooster who instead of announcing the dawn is weeping for the island's inhabitants who ask merely for the right to rise peacefully from a night's sleep. Brathwaite sings too Masks' pained final plea: "let me succeeeed." 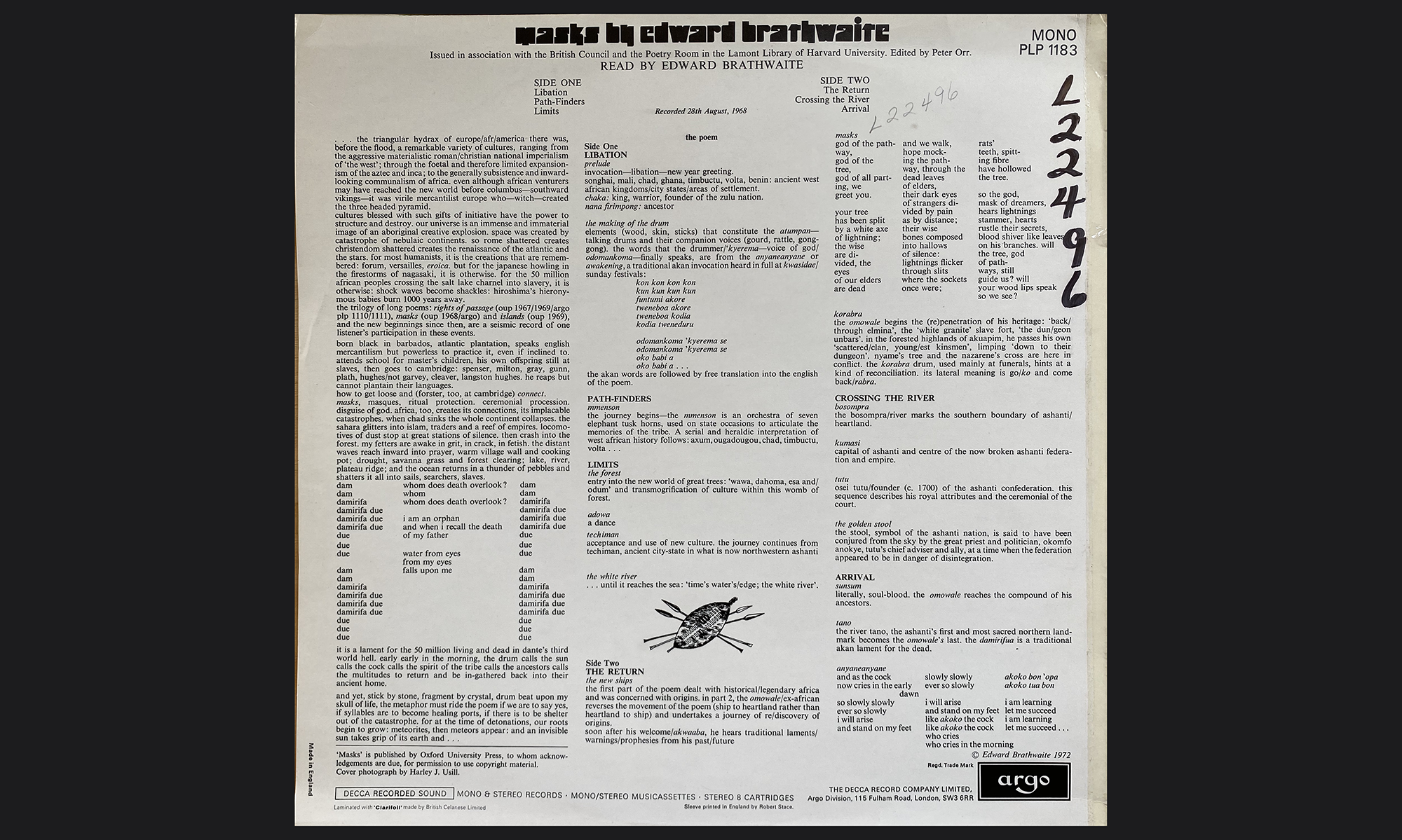 I really recommend listening to the entire record while reading along, as I think it's difficult to imagine a work's musicality through text alone, and this quality is especially crucial in Brathwaite's poetry. The Internet Archive has a PDF of The Arrivants available to "borrow" for an hour at a time, which happens to be almost the exact runtime of the record (and you can always borrow it again with another click). Masks begins on page 86 of that version.

A friend's mother recently sent me a box of poetry cassettes and CDs, which contained an apparently rare Brathwaite tape from 1989 called Atumpan, which does not appear to contain the section of Masks with which it shares its name. One of these days I'll buy a tape deck and add it to this blog. For now, Masks is plenty to marvel at.

A1. Libation
A2. Path-Finders
A3. Limits
B1. The Return
B2. Crossing the River
B3. Arrival