Have you ever seen Gwendolyn Brooks' grave? Its headstone is shaped like a hardback book and etched on its cover are a portrait of the author and the titles of her published works, declaring forthrightly that the bones contained at this burial site had remarkable contents themselves. I love that the stone/book adheres neither to the rules of headstones nor jacket copy, as the rules of either would not do for such a monument to such a writer. It is instead an abrupt fusion of the two, which in very economical fashion conveys the basics of her life and work. I love too that along with a writer, wife, and mother, her family considered her a "contribution to the world," which is probably how most would hope to be thought of by their loved ones as they're laid to rest. I'm glad that hers think of her in this way.

My brother Bryce alerted me to the shape of this grave last year, and it served as one more reminder that I need to digitize my copy of her only solo poetry record, Reading Her Poetry, published by Caedmon Records in 1968. Over this past weekend I finally got around to this chore, and have added it to my YouTube channel as well.

Along with Folkways, Spoken Arts, and Argo, Caedmon was one of the most prominent U.S. publishers of literary albums of the 20th century. It's a habit of mine to look up favorite 20th-century writers and poets to see what sort of audio media they released back when there was a market for such a thing, and if they did, it is often because of Caedmon, which was founded by Barbara Holdridge and Marianne Roney Mantell and is considered an important predecessor of spoken-word media and the audiobook.

The label being run entirely by women, the owners sought to promulgate the work of women authors. For this reason it's not surprising that they published an entire album of Gwendolyn Brooks' poetry, as she was one of the most celebrated poets of the label's heyday. What's more surprising is that no other such solo records exist (though she and her work did appear on a few other compilation albums).

The record features Brooks reading poems spanning her career at that point: A Street In Bronzeville, the Pulitzer-winning Annie Allen, The Bean Eaters, Don L. Lee's magazine Black Expression, and her then-new book In the Mecca. For me the most exciting inclusion is "Riot," the first section of her chapbook-length poem of the same name, which before acquiring this record I had not heard her read. She wrote RIOT in response to the uprisings that took place across the city of Chicago following the assassination of Martin Luther King, Jr.

This section of the poem imagines the Italian explorer John Cabot being so appalled at the behavior he finds in the United States that he cannot focus on the luxuries of his home continent: the Jaguar he drives around a Chicago suburb, a favorite dish at Maxim's in Paris. He is subsumed by the rioting mass and cries out to god asking for their forgiveness. He does not appear in the other two sections of the poem, and "An Aspect of Love, Alive in the Ice and Fire" and "The Third Sermon on the Warpland." These other parts do not appear on the record, although the precursor sonnet-and-then-some "Sermon on the Warpland" does. 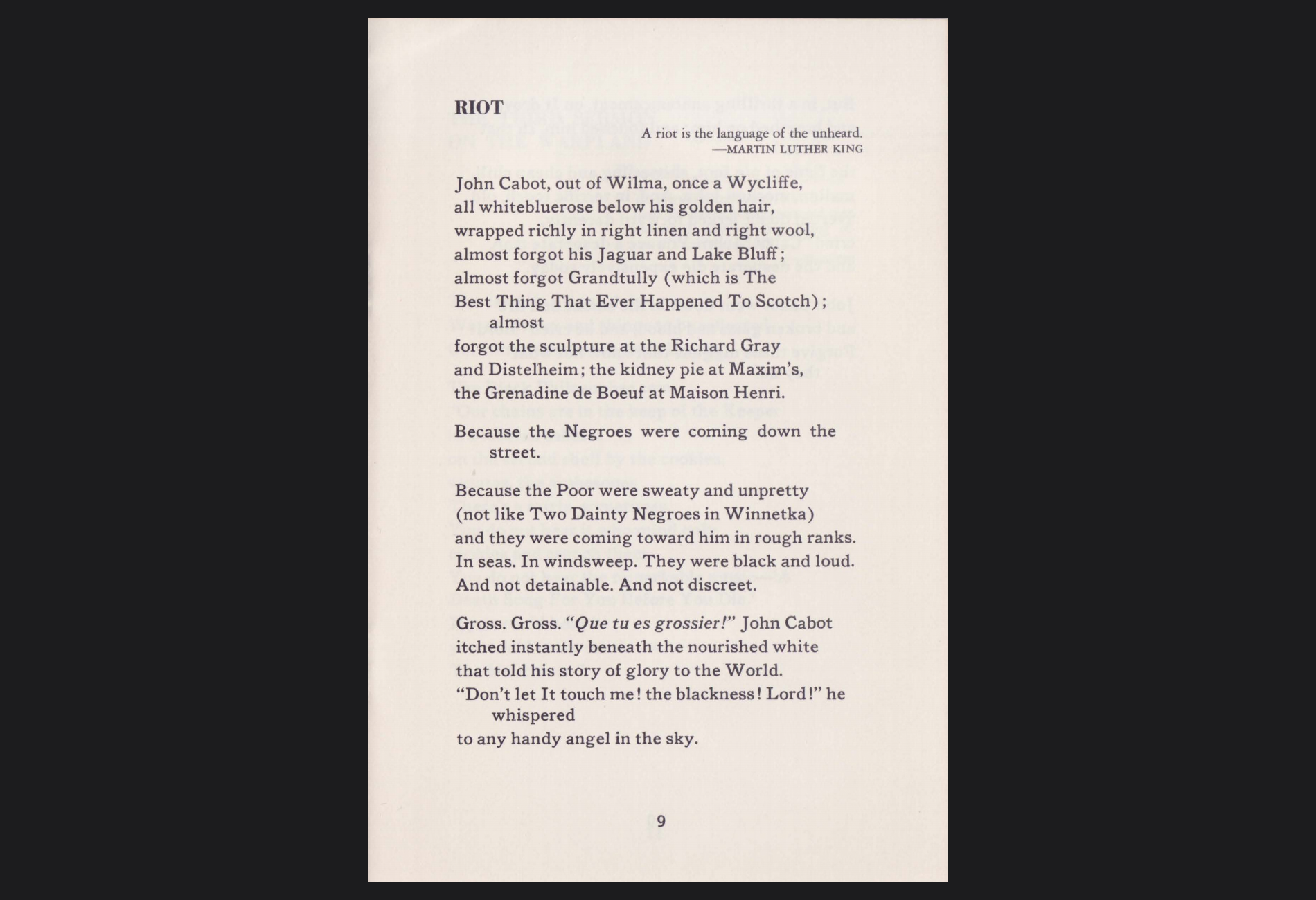 Notably absent is "We Real Cool," perhaps Brooks' best-known poem. A separate recording of her reading it suggests that she was tired of the interest in this poem vastly outweighing that of her others. She says in that reading that, "Most young people know me only by that poem. I don't mean that I dislike it, but I would prefer it if the textbook compilers and the anthologists would assume that I'd written a few other poems." Here we get seven other poems from The Bean Eaters, in which "We Real Cool" originally appeared, including "A Man of the Middle Class" and the scathing "The Lovers of the Poor."

After attending the Second Black Writers' Conference at Fisk University, Brooks wroted that, "Until 1967 my own blackness did not confront me with a shrill spelling of itself." In these readings one hears clearly the breadth of language that composed Brooks' style, drawing from standard English, older works like Edward Young's Night Thoughts, black colloquialisms, Ron Karenga. Her strong belief in the vernacular of her people is on full display, and deliberately set next to what poetry fans would recognize as "high" reference. These qualities are present in her early works too, but are more pronounced in "Riot" and the poems from In the Mecca, which were written after this change took place, and in which she strays from the blank verse, sonnets, and traditional English prosody that Carl Phillips refers to as "the master's tools" and created her own structures and prosody. 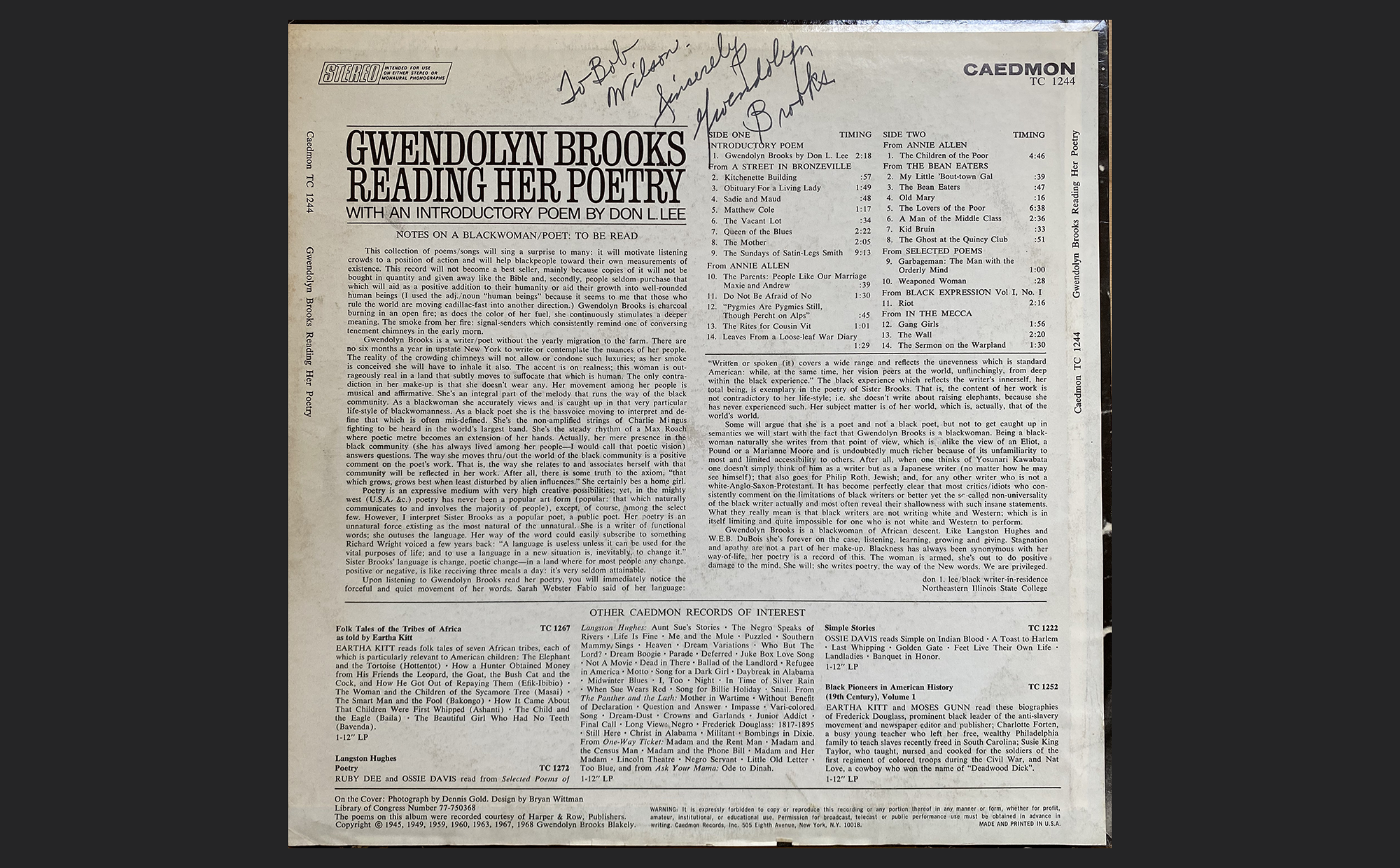 Back cover of Gwendolyn Brooks Reading Her Poetry (Caedmon Records, 1968) with liner notes by Don L. Lee. My copy is signed by Brooks and dedicated to a Bob Wilson. I speculate that this may be the Bob Wilson who ran Greenwich Village's Phoenix Book Shop and who was known as a friend to many poets.

The poet Don L. Lee, later known as Haki R. Madhubuti, reads an ode to Brooks on the album's first track, and also provides beautiful and funny liner notes that extoll Brooks' place in Black literature and plainly calls her would-be critics idiots. He writes: "The woman is armed, she's out to do positive damage to the mind. She will, she writes poetry, the way of the New words. We are privileged." He's right.

The recording is available below. I feel doubly privileged to offer it to you.

From A Street in Bronzeville
2: Kitchenette Building
3: Obituary for a Living Lady
4: Sadie And Maud
5: Matthew Cole
6: The Vacant Lot
7: Queen of the Blues
8: The Mother
9: The Sundays of Satin-Legs Smith

From Annie Allen
10: The Parents: People Like Our Marriage Maxie and Andrew
11: Do Not Be Afraid Of No
12: "Pygmies Are Pygmies Still, Though Percht on Alps"
13: The Rites For Cousin Vit
14: Leaves From A Loose-leaf War Diary

From Selected Poems
22: Garbageman: The Man with the Orderly Mind
23: Weaponed Woman

From Annie Allen
28: The Children of the Poor*

* The sleeve lists this track as the first on side B but it's actually the last one on the record.