I've really come to appreciate the bookshelf in my old bedroom in Roanoke, which is the only enduring media shelf in my life, and which allows me to puzzle over personal history through the prism of past reading. It still hosts many books that I read over a decade ago, around when I last resided here. It contains some novels I read in late high school — Post Office, On the Road, This Side of Paradise, Tortilla Flat — and many books from early college days that I must have thought looked good on a shelf but that I didn’t form enough of a connection with to bring along when I moved to Chicago in 2010 — Robinson Crusoe, Martin and John, I Am Not Sidney Poitier, The Yellow Wallpaper and Other Writings. (Which is not to say that these last have much in common except that they were read by me.)

The morning after my arrival I spent some time sitting in front of this shelf, and I noticed a slim volume of David Henry Hwang’s 1988 play M. Butterfly, which I hadn’t thought much about since I first read it in a postmodern literature class I took in maybe 2008. In fact I barely remembered anything about it except that it was in some way adapted from Puccini’s turn-of-the-century opera Madama Butterfly. I read it in about a day and among other emotions the play produced in me was shame directed toward a younger, stupider me for not engaging with it more enthusiastically back then. 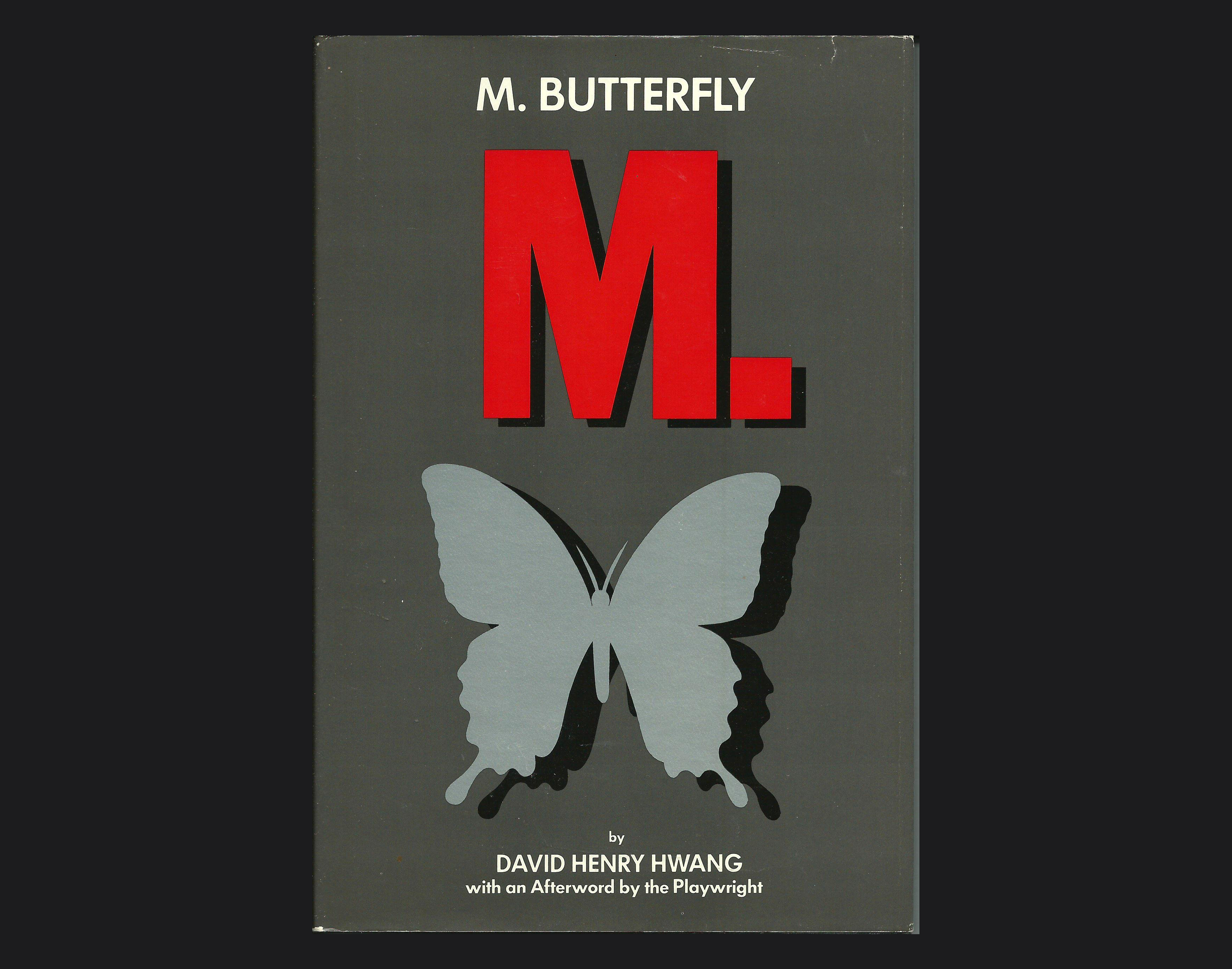 The play’s essential conflict comes from a two-paragraph New York Times story of international intrigue and colonial power relations, which Hwang heard about over dinner with friends. While posted to the French embassy in Peking, the French diplomat Bernard Bouriscot fell in love with Shi Pei Pu, who he thought was a Chinese actress, but was actually the male opera singer who often performed roles of women characters. Shi was working as a spy, and over the course of their relationship helped obtain an estimated 150 classified documents from Bouriscot, who had provided them to the Chinese government so that he would be allowed to continue seeing her once he was no longer stationed in China.

In considering the theatrical possibilities for the story, Hwang saw a clear link to the Puccini opera. He writes in my edition’s afterword that at the time he didn’t know much about the plot of Madama Butterfly: “I knew Butterfly only as a cultural stereotype; speaking of an Asian woman, we would sometimes say, 'She’s pulling a Butterfly,' which meant playing the submissive Oriental number. […] Sure enough, when I purchased the record, I discovered it contained a wealth of sexist and racist clichés, reaffirming my faith in Western culture.”

In rereading the play and watching David Cronenberg's 1993 film adaption (which is fine but not amazing), I thought of my own related record-buying experience: finding my first copy of E.L. Gang's extremely strange 1991 single "Japanese Love," a record that anyone who is familiar with my DJing (insofar as anyone is "familiar" with my DJing") will recognize, at Academy Record Annex in Greenpoint. 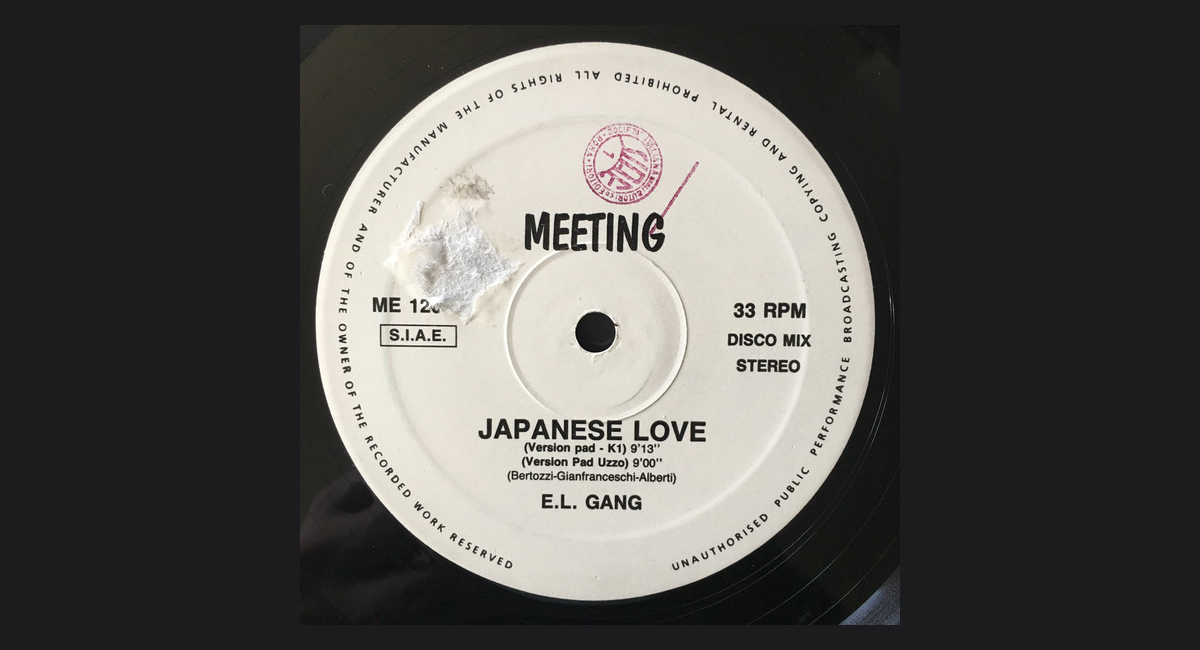 Although the genre is rife with grating Eurodance or unhinged and oversampled takes on "progressive" techno or trance, I love Italy's early contributions to house music, and it is my strict policy when record-digging to give a listen to anything I come across bearing the red Italian import stamp. In the case of this $4 record I was surprised to find not a gaudy Hoover melody, but the voice of a lover delivering a pining monologue over an airy downtempo track. It wasn't until I took it home and listened to the entirety of it that I noticed that the soprano singer's interpolation of "Un bel dì vedremo" from Puccini's opera bears an obvious resemblance to Malcolm McLaren's similarly paced take on the same piece, "Madam Butterfly" from 1984.

Like Puccini, E.L. Gang is Italian — real name Frankie Marlowe. Any curious listener who comes across "Japanese Love" will wonder what other odd music the man must have made, and like me they will likely be disappointed to learn that his other works are mostly unremarkable vocal Italodance like Elaine Lay's "How Deep Is Your Love" or No "Cindy" Joke's "Don't Make Me Cry." As Nine 2 Six, he also remade Grace Jones' "Slave to the Rhythm" in a new-jack style which does nothing to improve on the original. As far as I can tell, his other memorable piece of music comes is packaged with 2 B Blue's cover of Nina Simone's "It's Cold Out Here": the cinematic b-side "Sound of Waves."

Marlowe is a good steward of his work. He hosts his music on his own YouTube channel, and chimes in to provide context for some of his records on their Discogs pages. In the Japanese Love comments, he's given us a clue as to where his head was at when he made it: "Project realized at the Crystal Studio - Italy, in the spring of 1991, from an original idea by Frankie Marlowe. Fusion of ambient music, downbeat and opera."

Elsewhere in his afterword, Hwang writes that he doesn't consider the play to be solely anti-American, but more of a, "plea to all sides to cut through our respective layers of cultural and sexual misperception, to deal with one another truthfully for our mutual good, from the common and equal ground we share as human beings":

For the myths of the East, the myths of the West, the myths of men, and the myths of women — these have so saturated our consciousness that truthful contact between nations and lovers can only be the result of heroic effort. Those who prefer to bypass the work involved will remain in a world of surfaces, misperceptions running rampant. This is, to me, the convenient world in which the French diplomat and the Chinese spy lived. This is why, after twenty years, he had learned nothing at all about his lover, not even the truth of his sex.


It's fascinating that just a couple of years after Hwang's play, when it was being celebrated and put on around the world, Marlowe, apparently unknowingly, was making a case for its continued pertinence, using nearly identical themes right down to the same aria from Puccini's opera. "Japanese Love" contains many of the trappings that M. Butterfly notes as misperceptions furnished and made more vivid by the fog of colonialism: nostalgic longing for the submissive love of a Japanese woman, a dainty "Asian" melody played through a koto-like synth patch, the invocation of the butterfly figure through the opera vocal — all cobbled together to create an air of otherworldliness or exoticism that none of Marlowe's other records could achieve without use of these elements.

In my experience, downtempo music from the 1990s and early 2000s is absolutely full of orientalist signifiers like a vaguely Indian vocal or simple tabla beat, likely designed to fit the Buddha Bar-style atmosphere of hookah bars and lounges that were popular at the time. "Japanese Love" is infinitely more listenable and interesting to me, partly because the production has a lot in common with the early-90s garage house that I love, and partly because its audacious whirl of influence feels sincere. I hear in it a sensitive mind, which allows me to hope that if Marlowe were privy to Hwang's thoughts on "Japanese Love"'s vein of imperialist pilfering, he might have played down the Butterfly angle. But perhaps I'm grasping here.

I've played "Japanese Love" out many times (it's a great way to open or close a party), and have created a digital version for when I eventually wear out all of the copies I'm able to find. Nearly every time I do someone asks what it is. I think that people who are confused about what they're hearing, like I was when I first came across the record, hope that it actually comes from Japan, and that knowing the name of the song might lead them to more goofy, chintzy, odd music like it. Perhaps the fact that there's not much of a rabbit hole to follow, and that the artist's catalogue is quite patchy, is Marlowe's punishment for not doing his homework.