In general, it's too easy to dismiss one's hometown as lacking in culture or significant history, perhaps especially when one comes from quiet town like Roanoke, VA. In general, such a dismissal is a mistake. Since I moved away in 2006, my visits have mostly been confined to the Christmas season, as I've preferred to save my spring or summer travel for less familiar terrain. This means that Roanoke and its surroundings are to me mostly reduced to the same few friends' and relatives' homes and just a couple of restaurants that we go to around the holidays. It also means that my impression of this part of southwest Virginia is informed by my engagement with it as a teenager, and that I've remained quite ignorant of much significant history in the region.

It's only in the past few years that I've learned that two significant figures share my birthplace: Henrietta lacks, the Black woman whose cancerous cells were preserved and studied without her consent and live on as the most famous cell line in medical history; and Don Pullen, the jazz pianist who throughout the second half of the 20th century played with greats like Milford Graves and Charles Mingus, recorded virtuosic solo records, and led his own bands that included George Adams, Dannie Richmond, and Hamiet Bluiett.

I left my apartment in New York in early-mid March with the intention of visiting my parents for a few days and then going on to canvass for the Bernie Sanders campaign. In the days just after I flew, American cities started to take coronavirus seriously, the Sanders campaign suspended all upcoming events, and all of my and the rest of the world's plans changed. (I wrote a bit about the first weeks of my experience in The Believer.) I decided not to go back to New York, and I now find myself in Virginia for what I think will be the majority of the summer.

I've talked/joked with friends for years about a plan to move back to Roanoke for a bit solely to create a public memorial to Don Pullen, now one of my favorite pianists. Upon arrival here I decided it would be a waste not to use the present circumstances, awful though they are, for at least one positive project. My brother Bryce is now here with me as well, and because he has recently worked on the University of Virginia's Memorial to Enslaved Laborers and a proposal for another public monument in Vienna, and because of our many shared research interests, I asked if he'd like to work with on it with me.

We've had a couple of meetings so far, including one with Don's son Keith Pullen, and are very much in the early research stages, looking for whatever archival material Pullen left behind and visiting other sites of Black-historical remembrance and recognition in the area.

My favorite such site so far has been the Pierce Street Renaissance Historic District in Lynchburg, VA, which I stopped by on my way home after attending an anti-police/Black Lives Matter protest in Charlottesville with my brother Blair and sister-in-law Elizabeth. I was aware of the Anne and Edward Spencer house and mentioned to Blair that I'd like to go see it, and he told me that he'd heard of another site in Lynchburg commemorating the tennis court owned by Dr. Robert Walter Johnson (aka "Whirlwind"), where he hosted and trained promising young Black tennis players, including Wimbledon champions Althea Gibson and Arthur Ashe. It turns out the court is almost directly across the street from the Spencer house, and that the entire area has been designated a historical site.

The court was originally made of red clay but was redone in green and reopened by the Whirlwind Johnson Foundation in May 2018.

According to the provided brochure, Pierce Street was a border of the Confederate mustering ground Camp Davis, which during Reconstruction became a refuge for freed slaves and saw residential development when the area was annexed by the city in 1870. There are signs commemorating important Black educators, activists, officials, and artists all around the four-block district.

By a miracle of conservation and what has surely been decades of fundraising and educational effort, the house where librarian and Harlem Renaissance poet Anne Spencer lived with her husband, Edward, is not only still standing, but the house, garden, and backyard cottage feel absolutely vibrant. The house is now a museum, which was unfortunately closed due to COVID-19, but from what I could see through the windows looks inviting and livable, Edward's colorful interiors made of cast-off building materials all lovingly preserved.

On the right side of the house, colliding brick paths outline stark grass geometries and create the most beautiful driveway I've ever seen, which leads back to the garden — thankfully open even with the pandemic. Virginia spiderwort and lilac bend over the walkway all around, and a patch of Anne's own roses still grows today. To the right of the entrance sits the cottage, which Edward named Edankraal — a portmanteau of his and his wife's names and kraal, the Afrikaans word for homeplace. The cottage contains a desk covered with preserved manuscripts, a thatched sofa-bench, a reading chair, a large table, and many photos of (I'm sure) family and the many notable friends who they hosted there. It also has an outdoor oven or fireplace, on which they must have prepared many great summertime meals.

The city's signage for the Anne and Edward Spencer house. 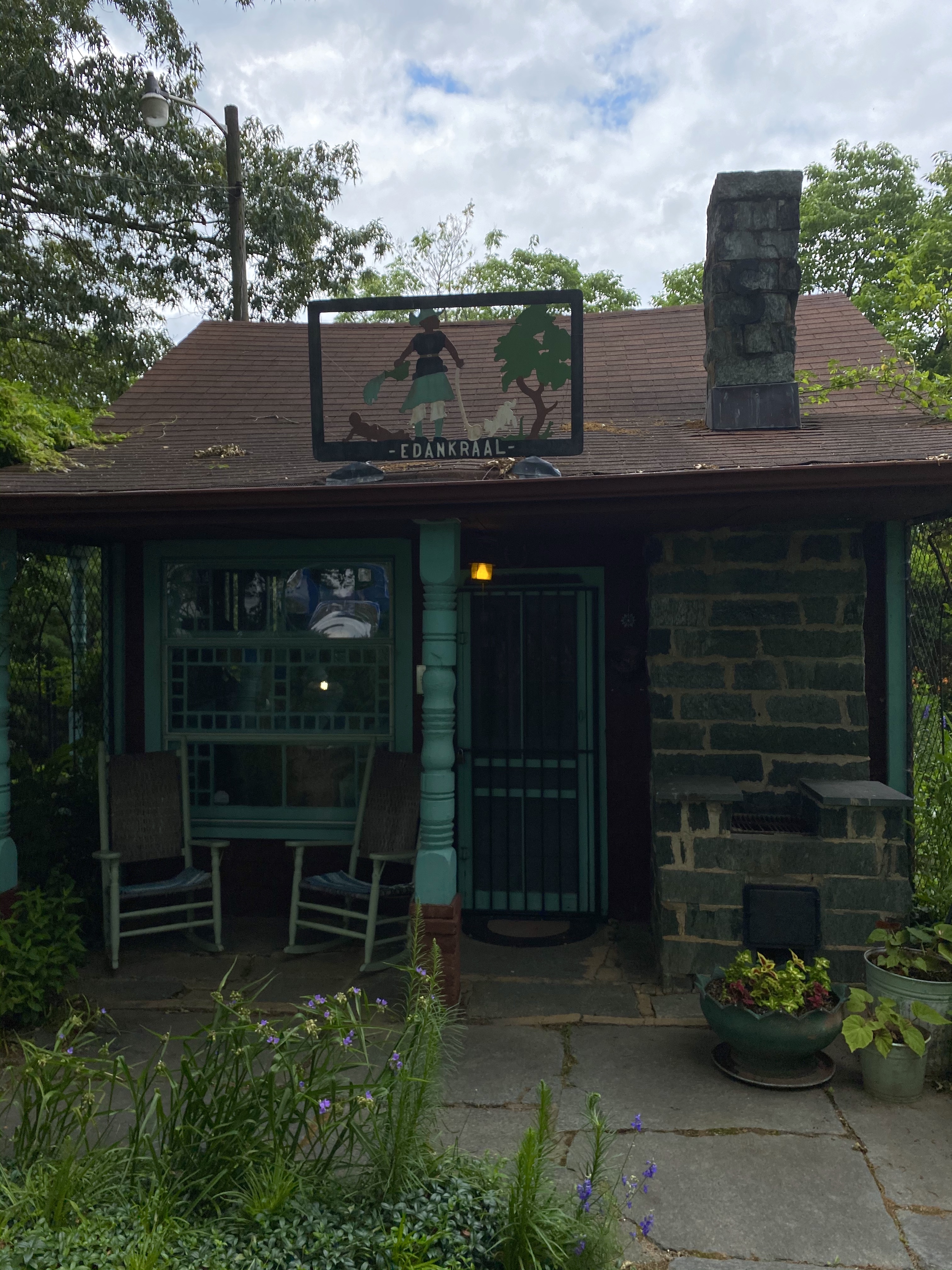 The Spencers' house had a second-floor bathroom, which according to the brochure "was installed at a time when few homes had indoor plumbing, and this modern convenience was one reason the Spencers were in a position to offer hospitality to traveling scholars, and many of them frequently returned once they experienced the stimulating atmosphere at the Spencer home." The couple's list of guests is staggering: Zora Neale Hurston, Claude McKay, Langston Hughes, James Weldon Johnson, Paul Robeson, Sterling A. Brown, Countee Cullen, Adam Clayton Powell, Booker T. Washington, Marion Anderson, Martin Luther King, Jr., and W.E.B. Du Bois all laid their heads at the house on Pierce Street.

A gift from Du Bois is visible on the edge of the garden's fountain: a cast-iron head they named Prince Ebo, perhaps after Ebo Landing, the site on St. Simons Island, GA where in 1803 captive Igbo people decided to commit mass suicide by drowning rather than be coerced onto the land and into chattel slavery in the United States.

The fountain bearing the cast-iron sculpture of Prince Ebo, a gift from W.E.B. Du Bois.

The back of the house as viewed from the garden.

A researcher found the following in 2008, written by Anne (year unknown):

We have a lovely home — one that
money did not buy — it was born and evolved
slowly out of our passionate, poverty-
stricken agony to own our own home.
happiness

To be alone in a quiet garden, created by such an accomplished pair, within reach of a sculpture carried to Virginia by the great historian and socialist, surrounded by life maintained by family members and others who long ago decided that the house's spirit was worth carrying into the future, especially in an area where one can drive just a few miles in any direction and find MAGA and Confederate flags flying from many properties, and where, in my experience, "freedom" means the ability to answer only to one's own immediate needs or desires — to be in such a setting is to me to feel culture as a lived expression of a socially minded conception of the world, how it is and might further be. It's a wonderful tribute, and it's made me dream wildly about how, with fairly few resources at hand, we might honor one of Roanoke's greatest artists in a lasting way.