Not Exactly in Search of Stokes Prickett, Author of Foodie

One of the odder ducks that has crossed my path recently is my unbidden receipt of the sixth volume of a serial novel called Foodie, written by someone going by the name Stokes Prickett. It arrived by mail in a manila envelope with four postage stamps and no return address, and it bore my name as well as my address so I know it wasn't sent to my apartment by mistake. At first confused and trying to recall if I'd supported a friend's Kickstarter or something, I Googled the title and author. The results led me to tweets by other recipients who all shared the same story: a volume of Foodie had appeared in their mailbox with no return address, and they have no idea who sent it. I don't know any of these other Twitter users although I do appear to have mutual friends or acquaintances with some of them — a smattering of people from the art/music/literature/design worlds. 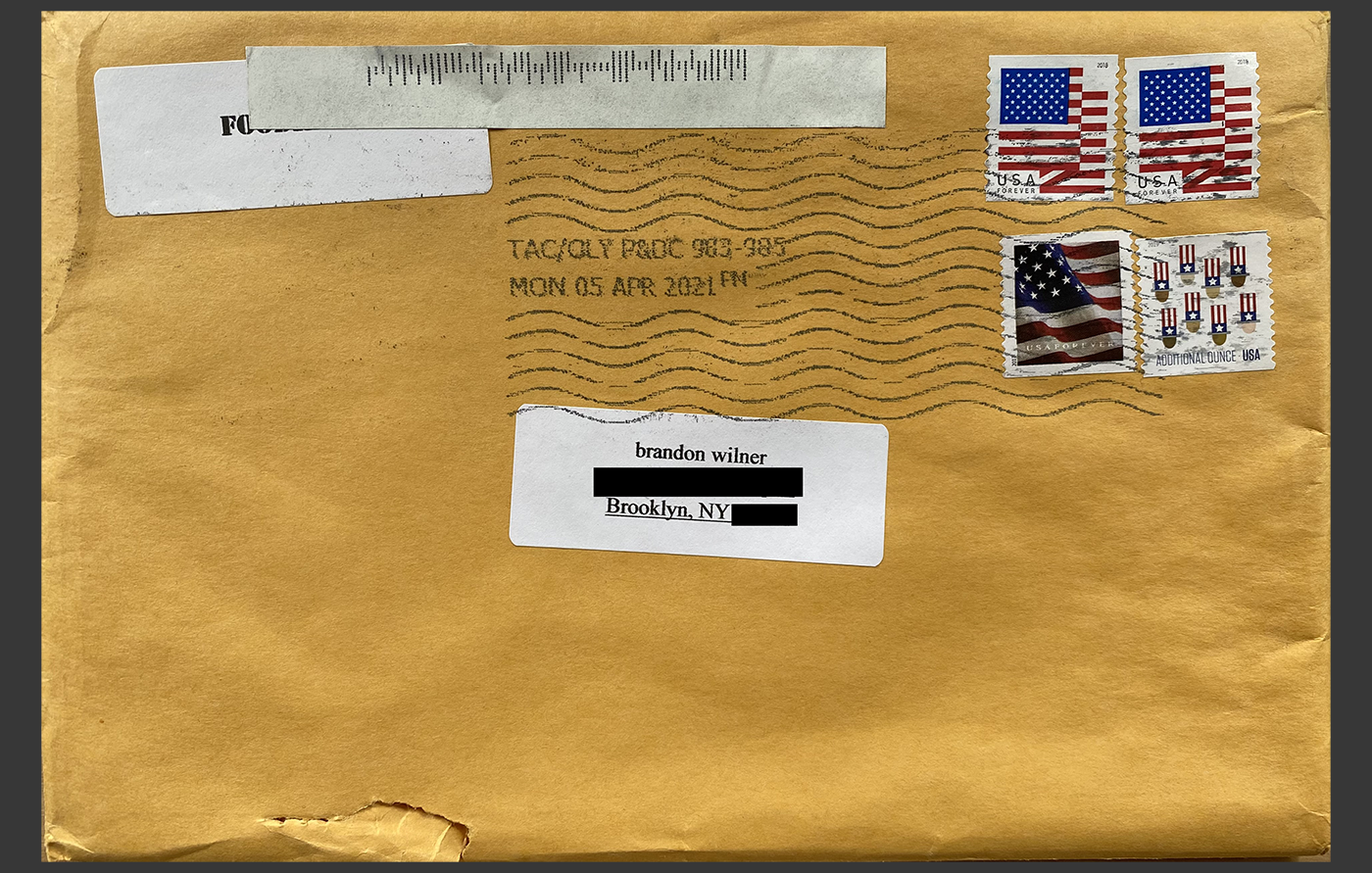 The envelope that Foodie Six arrived in.

A fellow Foodie member named Adam Dalva seemed to have taken it upon himself to gather and analyze information on the project, so I reached out to him to see if he'd learned anything about its origin. He welcomed me to the club and told me that he is "so close to breaking this thing wide open." He put forth a list of writers and professors, asking if I knew any of them or if I had any connection to the Philadelphia music scene. My answer for each was and still is…… no.

The other result one gets when looking up the terms "Stokes Prickett" and "Foodie" is a SoundCloud page run by someone called Sherbert Taylor (great name), who also has a Twitter. At the time of this writing, the former has four followers (one of whom is me), and the latter has six (one of whom is also me). The SoundCloud features six readings of various chapters of Foodie, all of which are voiced by the same person and none of which exceeds two minutes in duration. I do not recognize the reader's voice. 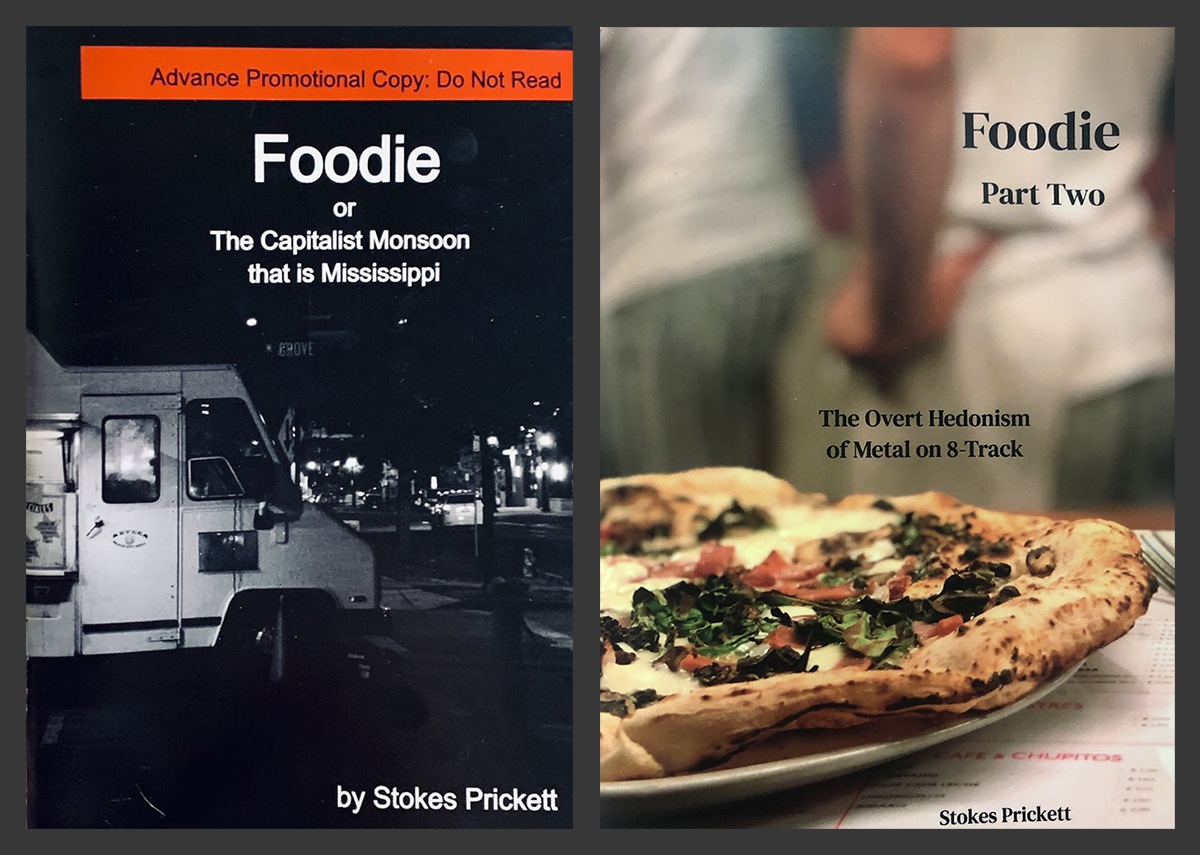 The covers of Foodie volumes one and two, taken from Ryan Ridge and Adam Dalva's Twitters.

Having assumed the mantle of lead Prickett investigator, Dalva was also sent an interview "with" Prickett "conducted by" Taylor. It's very funny for a few different reasons but primarily because of how little it does to conceal the fact that Prickett and Taylor are the same person, the voices of interviewer and interviewee reading pretty much identically. The introduction is written with the same intoxicated lucidity as Prickett's prose. As in the experience of tripping, Foodie's sensible yet unhinged language provides a similar feeling of clarity accessed through a substance known to obfuscate. "Interviewing this beast of an author was last summer's mattress-store blowout sale, an illogical thing for the erstwhile matadors," writes Taylor, apparently choosing his metaphors carefully. The document is also very funny because it shows an author interviewing himself under two apparent pseudonyms based on the pretext that the work in question is one of the most significant of our lifetimes: "Take a few lauded novels off your shelf and break their binding; Prickett's words are undeniably purer."

I have spoken with many interesting, enjoyable people in my monomaniacal quest to find Stokes, from the public domain photographers whose work grace the covers to the musician Weird Paul Petroskey. I feel I am getting close. Have you received a copy of FOODIE? Let me know.


The book is seventy-two pages long and has a simple, stapled saddle-stitch binding that looks like it was done by hand. Its cover features this free stock photo of a woman wearing a karate uniform with a black belt, performing an aerial kick. It has a title page but no colophon, and acknowledges the photographer as Caleb Oquendo. (Because Dalva's second tweet above mentions that all the photographers' photos are public domain, I have not bothered to contact Oquendo.) There is no other paratext that might provide any hint as to the book's origin. The rest of its contents are recapped events from past volumes and the latest installment of Foodie. 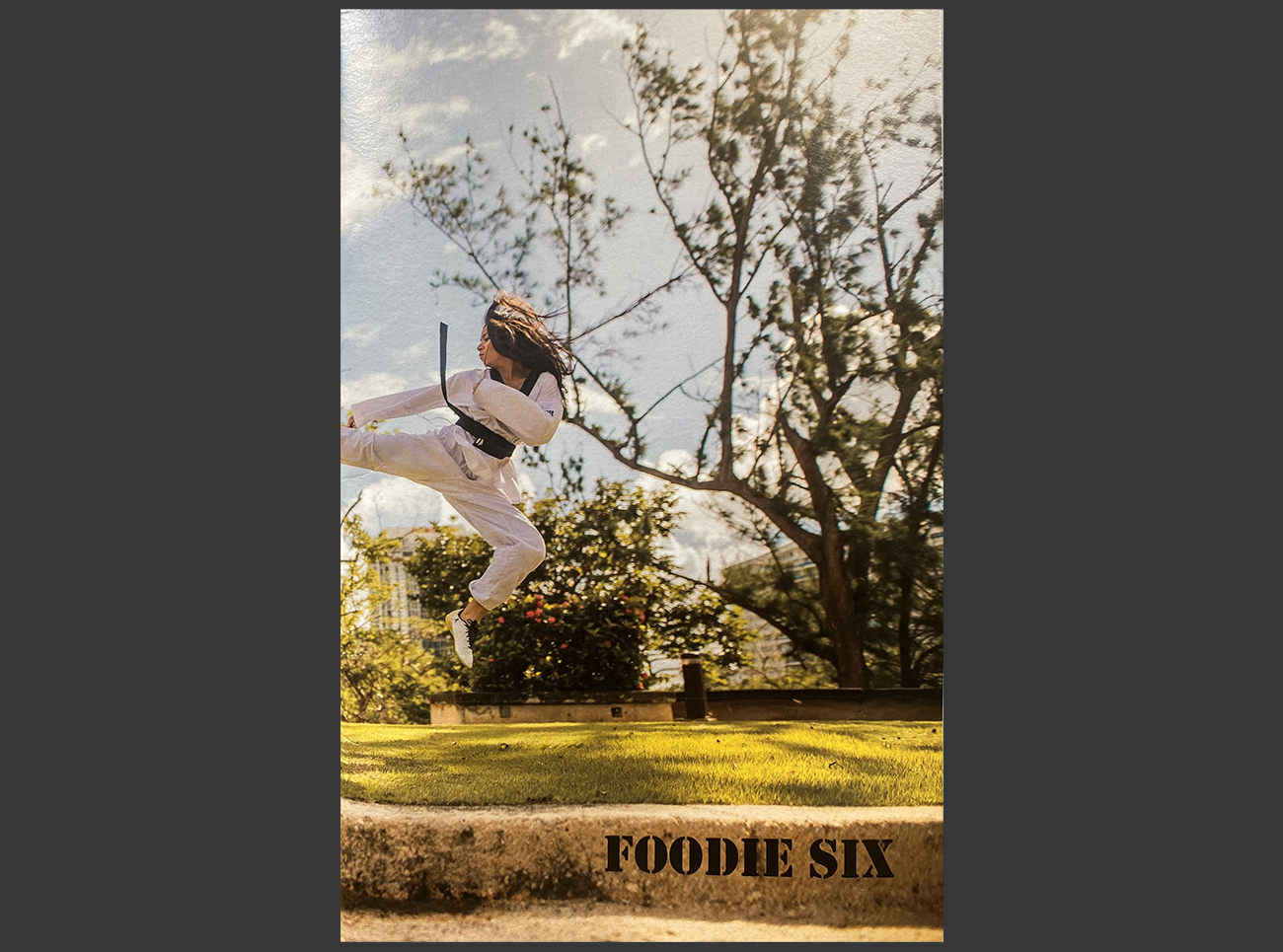 Foodie Six, front cover.
After examining the book's online presence and mentioning it to friends for a couple weeks, I decided that the only way to learn more about it was to read the damn thing, which I did. Perhaps even more surprising than Foodie's arrival in my mailbox is the fact that I love reading it, though I suppose it makes sense that I would admire the writing of someone who chooses to distribute it in this way. Two literary reference points that come to mind are Donald Barthelme's invented but recognizable Americana and Percival Everett's disdain for simple explication. 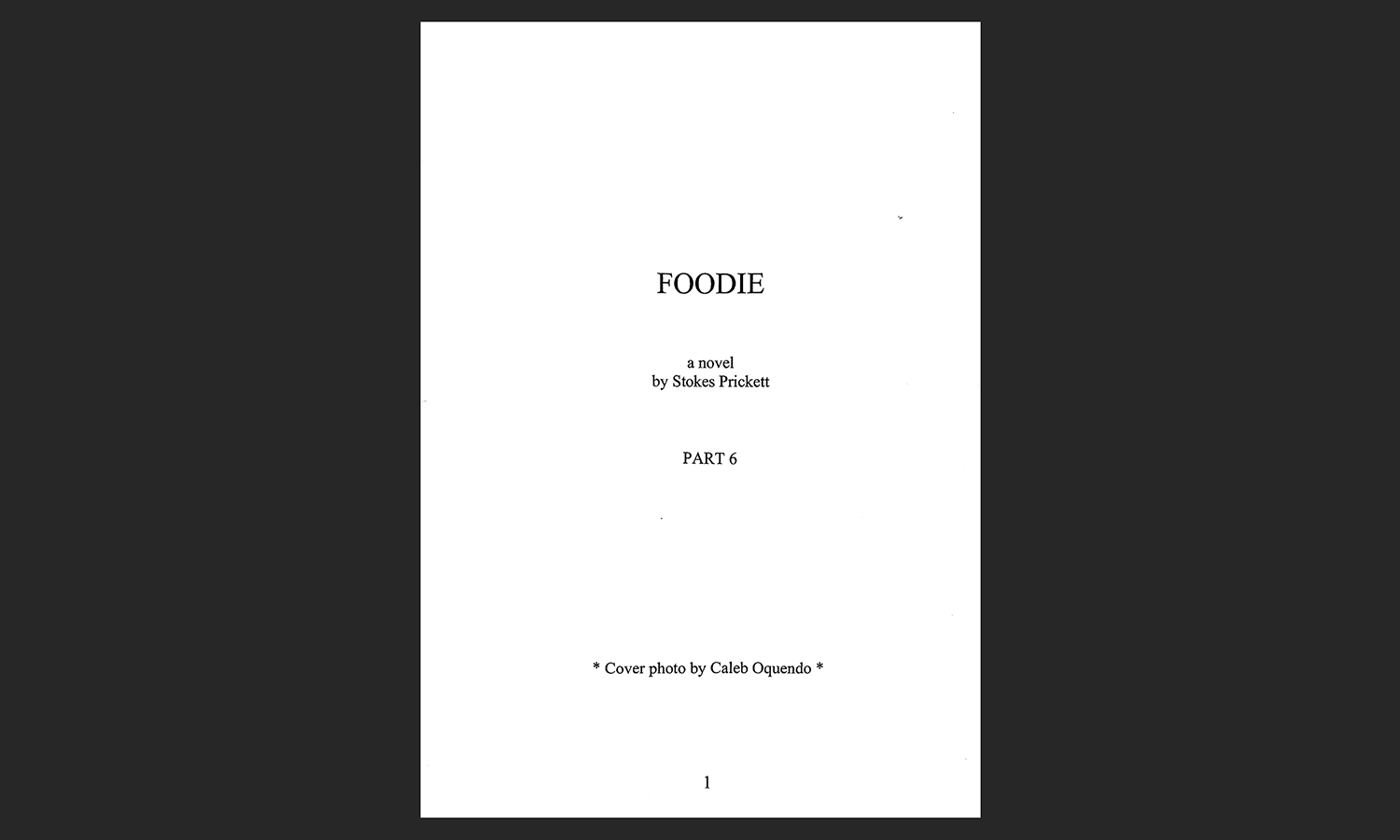 Foodie Six, title page.
A man named Rusty narrates, chronicling his relationship with his best friend and roommate, Foodie, as they drift from one line of work to another, always in search of a job that might feel a little more worthwhile than the last, and always involving some facet of food service or production, from opening their restaurant Responsible Tony's to working on a farm owned by the con artist Jack Estes. The recap of volume one tells of the pair's other good friend Dale, who took a corporate job, got rich, retired, and died young, and whom we visit in a rather earth-like Hell in the latter third of part six. 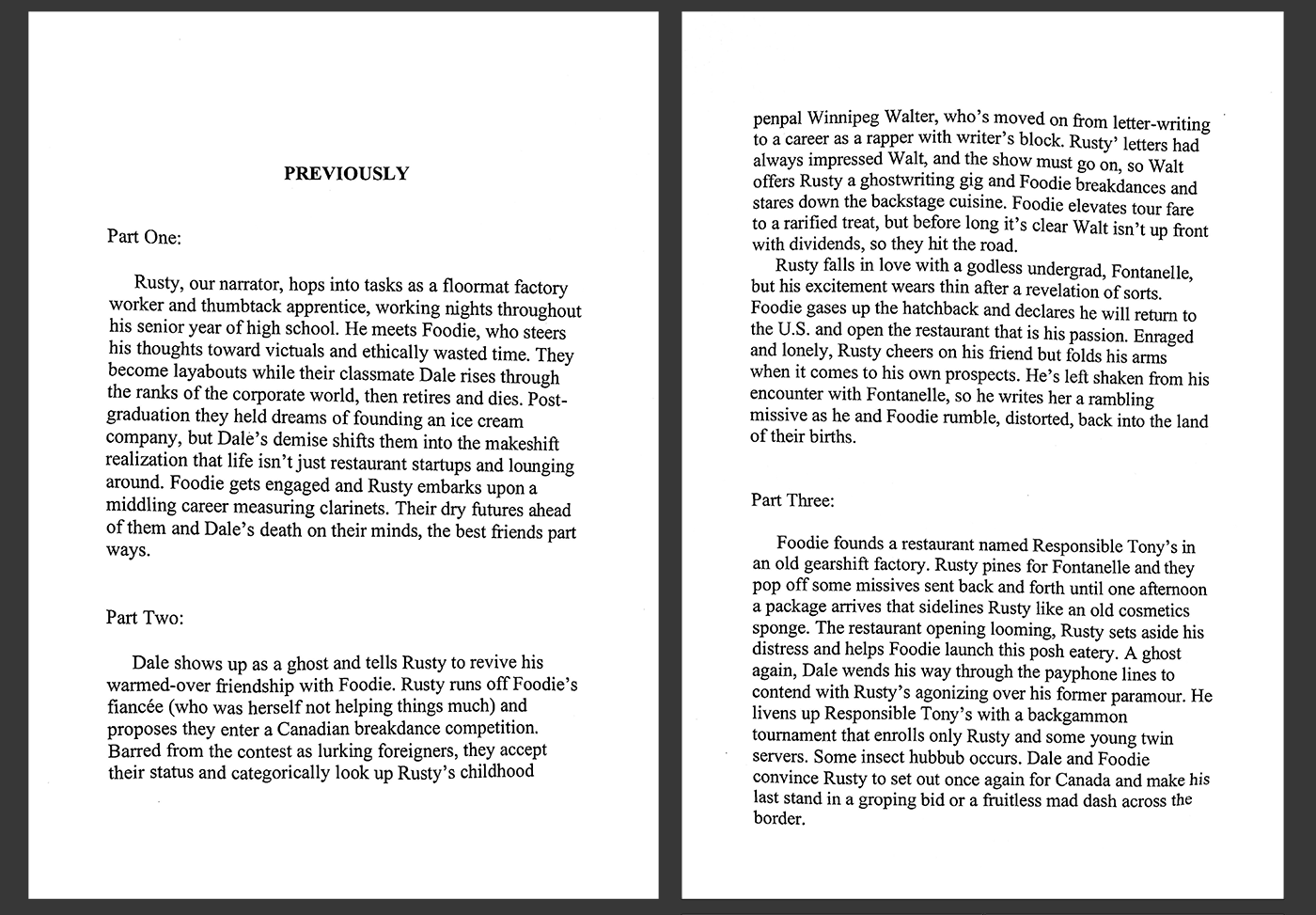 From Foodie Six, recap of previous volumes.
Events do take place (dreams followed, journeys embarked on, love interests met, conflicts encountered), but "plot" would be a strong word to use for the thrust of Foodie. None of the action seems to be building toward much; events pass as cars on the highway, and the characters just keep their eyes fixed on the road. Often a major plot point or decision comes and goes in a couple of sentences, such that Prickett begins a page describing a woman's feelings about marriage and ends it with Foodie en route to an emeregncy appointment with an oral surgeon. What matters more than the (lack of) rising action is the strange way that, like Taylor in the interview, Rusty chooses to process the events. The word "kaleidoscopic" is often a stilted substitute for "psychedelic," but its use is warranted when it comes to Rusty's narrative style, which is so densely descriptive its process seems to involve cycling through random terms until a suitable image happens to fall into place. There's one passage that I genuinely don't know whether to read as absurd literary device or revealing editorial oversight: "She gave Foodie and me a wise and startled outpouring as her shift resumed. I admired her for [insert trait] and her youthful rambunctiousness" (p. 16). I believe the inclusion of the errant brackets may have been purposeful, as the rest of the book is nearly bereft of typos or grammatical errors. Either way I think it's hilarious.

But this same tendency toward absurd reference and slotted-in description just as often leads to expressions of sad beauty, as when Rusty becomes ashamed at his plans to betray Foodie by sleeping with his lover:

As cities slept, I admitted my shortsightedness. Far-seeing people didn't leave friends behind because they didn't know what to tell them, but, hell, this barista woman had shaken me friendless. Maritime geographers forced things to fit into maps and left the vague topography of the seafloor unmoved and marked off. You are on your own, sailors, they indicated. Monsters lurk in the sea past here. I headed downstairs an uncertain seafarer, wondering where to go linger next (p. 40).

Foodie unfolds in passages short enough to look like, and displaying as much linguistic variety as, free verse. But excepting a short section titled "Hayseed" that lists only three bits of rural vocabulary, the language, however strange its referents, always adheres to standard sentence structures. This format is a canny means of making weird, unsolicited writing more digestible than if it had been presented as unbroken walls of rambling text. Having only a few more paragraphs in front of me each time I thought about giving Foodie a rest, I pressed on a bit further. Each time I was glad that I did. 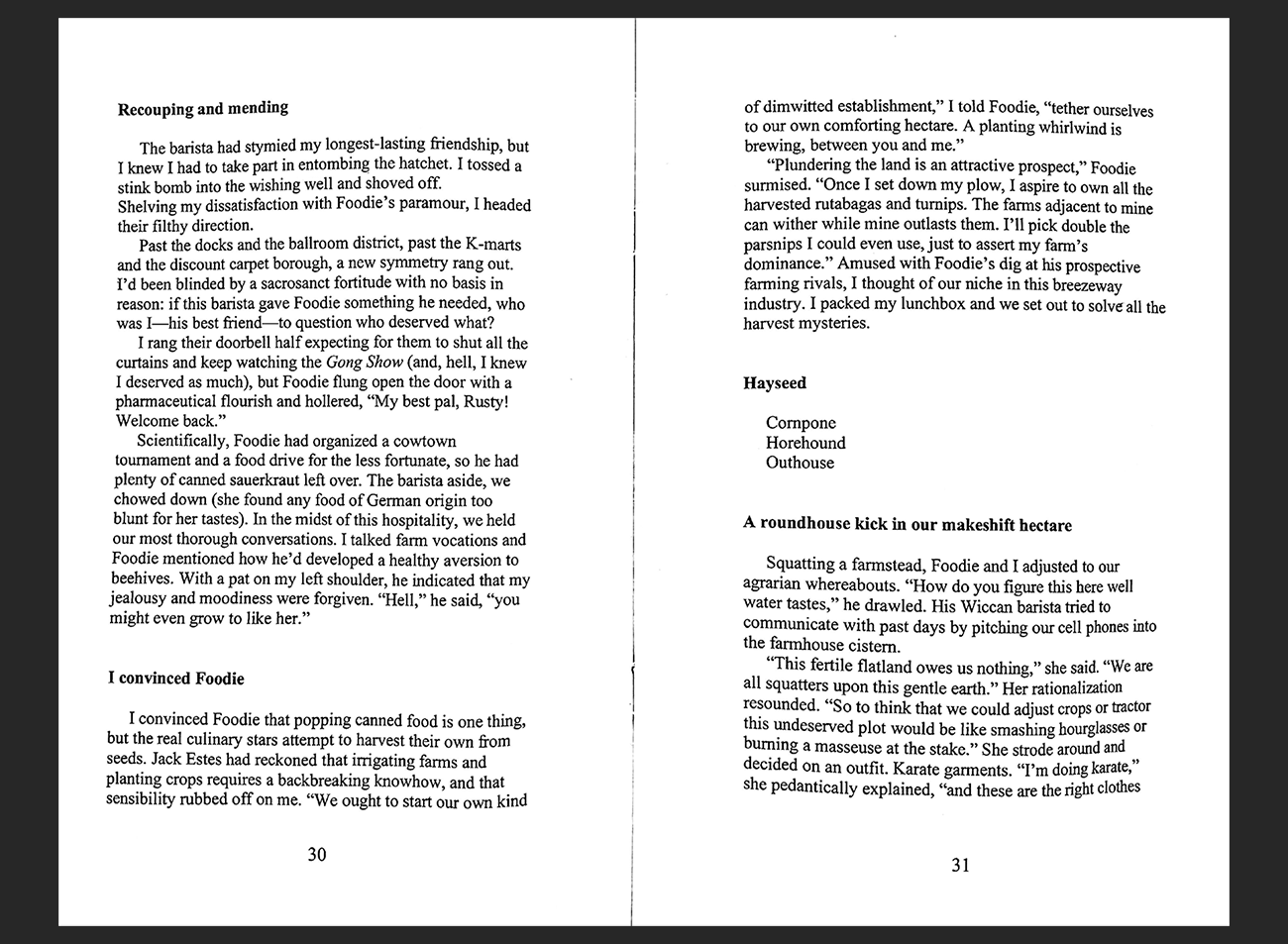 Foodie Six, spread of pages 30–31.
At this point I think my favorite aspect of Foodie is that it seems as though it's impossible to acquire if Prickett doesn't want you to have it. It's a non-story about friends who recognize the unsatisfying nature — the futility, even — of contemporary work, sadder still because theirs is the work of nourishing others, and it comes with none of the disadvantages of an artwork that's been forged into a social-media branding tool and whose perceived worth is largely dependent on extant clout. This latter cycle has lately had me down on much of contemporary cultural production writ large, and as a result I haven't been reading much fiction or poetry, aesthetic use of language these days seeming to offer just a fraction of the world-revealing satisfaction that it used to. Foodie is the fourth novel I've read this year, each of which has been wedged between much larger portions of nonfiction. I wouldn't say that it has "restored my faith" in anything, but it has reminded me that there are many different publishing models that can find their audiences and support great work.

If for some reason I'm not chosen to receive future Foodie editions, I'd understand and even respect it. But I do hope to at some point come across another visionary Prickett communication that isn't for sale. I'd like one day to agree again with the author, who in his interview says, "Gone are the days when it was a performance to turn on the dishwasher, where you'd gather the family before you finally pushed Start. Most of what entertained us then is boring as sagebrush today, but I stand by my statement that books hold truths in their binding."